One of his Home Show projects was featured on a television documentary that detailed each phase of building this new custom home from start to finish.  It, of coarse included a very satisfied customer.  Eric and his home building talent have also been featured in many publications including, Indianapolis Monthly Magazine and showcased cover of Builder/Architect Magazine. “I’ve been directly responsible for the successful completion of over 100 homes in my day.  In each and every one of them, I’ve learned something new and used that knowledge to better the next one,” says Eric. He, now in his late forties, has realized his genuine passion in building new homes is to help others fulfill the dream of building their own home and enjoy the equity and satisfaction of doing it yourself (DIY).  “I wouldn’t have been able to provide my family with such an amazing home to live in currently had I not built 4 DIY Homes.  I really enjoy and appreciate the DIY people.”

“To see all the pride, satisfaction and money savings that go along with this experience is very rewarding to me. I’m proud to be a part of this life changing event for my DIY clients.”-Eric Wetzel

Hope to see you at your new home site soon.-Eric Wetzel

Upon getting his appropriate education, Eric found a very fitting job for a DIY home building company called President Homes. He worked as a consultant/sales person for almost two years before he was given a promotion to Indiana territory leader. He worked this position for two more years, helping many build their own home and act as their own general contractor, before starting his own home building company, Winner’s Circle Homes LLC.  This endeavor proved to be very successful for Eric.  He built many custom homes over the course of 20 years including several Show Homes and Home-A-Rama Homes. 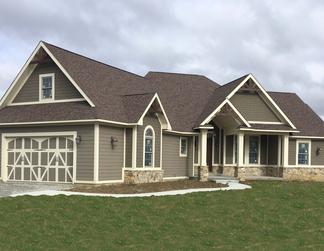 Eric, his uncle, and his dad started and completed what would be Mr. Wetzel’s 2nd big DIY new home project. “Some of my greatest life lessons and best memories come from these two DIY projects”.  With some experience under his belt, Eric discovered that he could earn more working for a general contractor than anywhere else, especially at age 16.  He went on to work for a number of framing, siding, and GC crews while obtaining his bachelors degree from Purdue IUPUI in Architectural Tech and Civil Engineering/Construction.

Eric Wetzel had his first DIY home building experience in 1979 at the young age of 12 with his Dad as they built their family home from the ground up.  They not only acted as the general contractor, but the two put together every single piece of the home subbing out only a bit of the excavating work.  “If the modern day equipment rental company had existed back then, we would have taken on the earth work too” Eric says. That project went so well, that Eric’s uncle decided to build his new home the same DIY way the following year.

D.I.Y.
~    DO IT YOURSELF~
Build more custom home for less money the DIY way.